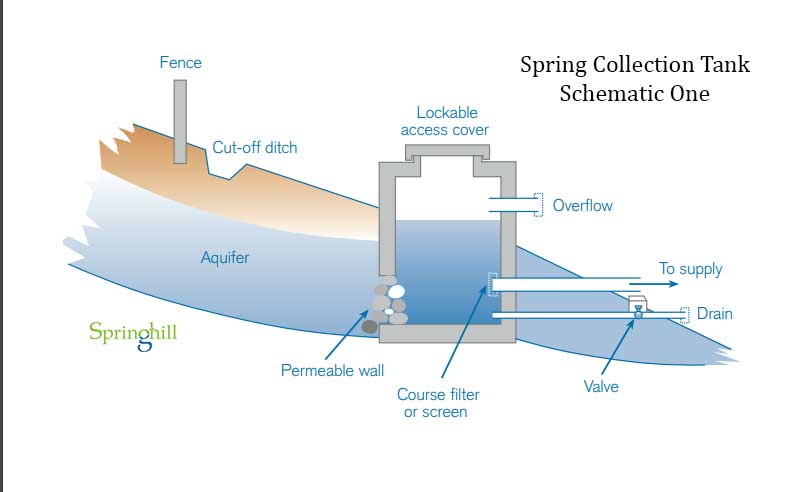 Even when a spring is shown on a map as a spring, the chances are that it is in fact a surfaced derived sources. Springs are rare in the UK as they require a rare type of geology. In the vast majority of cases the water from these ‘springs’ rarely passes more than a meter below the surface. Even in those rare cases where the water rises from deep below ground, the most vulnerable point of contamination is where the water ‘springs’ from the ground and mixes with surface run off, especially after heavy rainfall or a snow melt.
True ‘spring water’ can be of good quality but it must be protected from possible contamination once it has reached ground level. In particular, it is necessary to consider the possibility of pollution from septic tanks or from agricultural activities.

Fenced off area around the Collection Chamber

An overflow must be provided appropriately sized to take the maximum flow of water from the spring. (See schematic Two below). The outlet pipe should be fitted with a strainer and be situated above the floor of the chamber. The chamber should be built of a material that will not impair water quality and be designed to prevent the entry of vermin and debris.
The area of land in the immediate vicinity of the chamber should be fenced off and a small ditch dug up-slope of the chamber to intercept surface run-off.

Take great care when digging around a spring source

We strongly advice that great caution is exercised when digging around a source. Disturbing the top layers of soul, a ditch, or a boulder above or below the point where the water springs to the surface could result in the water taking a new route. In some cases, this can result in the water course being changed permanently. 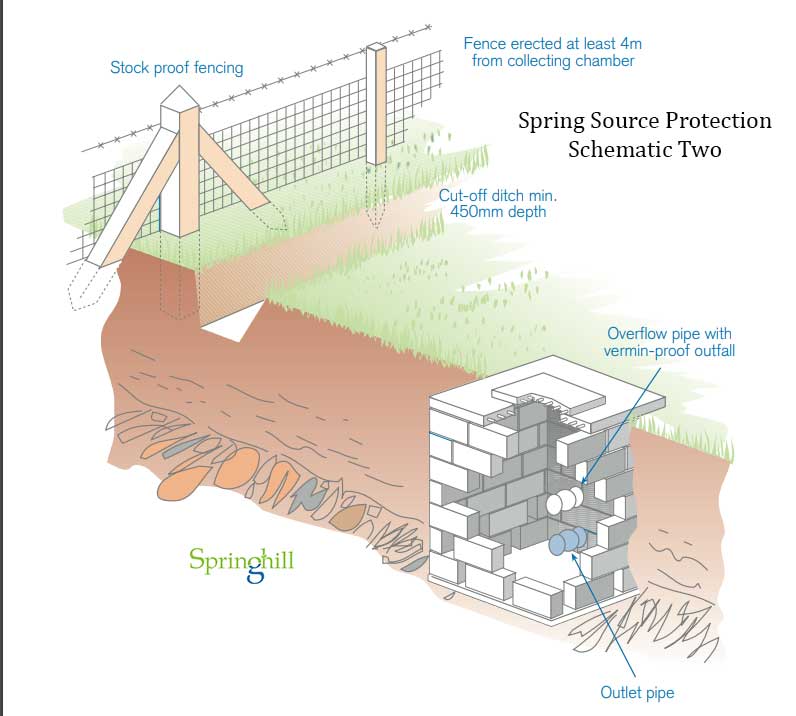 Springhill have been involved with borehole drilling for over 20 years. In that time we have identified a number of good working practices use by a variety of borehole drillers. Shown below is the good practice for well head design that covers the overall design. This design is in line with the Scottish Environment Protection Agency (Sepa)

It is important that the right precautions are taken when planning and constructing water supply boreholes, to prevent contamination of the sources themselves and pollution to the groundwater in general. There are many examples of badly constructed, completed or maintained private water supply boreholes, which can pose a risk to source owners. Once drilled and completed a borehole is often out of sight and out of mind – until things go wrong, e.g. becomes polluted, fails environmental health, or the output yield falls.

There is no standard specification for drilling or completing water supply boreholes. However, common objectives must be met, but precisely how they are achieved is a matter for the client and contractor. Both have legal and other responsibilities and legal liabilities. The client’s interests must be protected, whilst the contractor is usually looked on as ‘the expert’ in these matters, and is expected to use designs, materials and workmanship appropriate to the setting and risks.

Listed below are other factors that need to be considered when planning or constructing a borehole. They include: 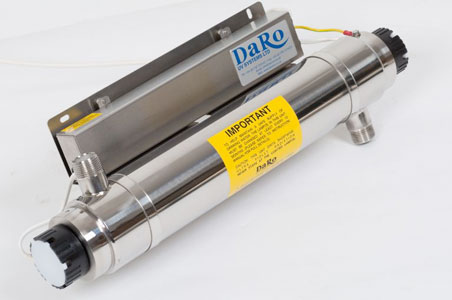 My water failed the Councils water test. What does it mean?

Water used as a source for a small supply of drinking water may be of unknown origin and
come from a catchment prone to consistent or intermittent contamination by faecal material from
domestic and farm animals, wildlife or sanitation systems such as septic tanks. As a consequence,
there is a high probability of pathogenic micro-organisms being present in the source water, and
adequate treatment must be applied before the water is used for domestic purposes. Because no
single treatment can be expected to remove all types of pathogenic agents, a multiple barrier
approach in the form of two or more sequential treatment processes is recommended.

The microbiological quality of drinking water has traditionally been assessed by monitoring for
bacteria called faecal indicator organisms (coliforms, E. coli, and enterococci). The presence of
these organisms is indicative of past faecal contamination and hence the possible presence of
enteric pathogens. Although indicator organisms are generally adequate for monitoring purposes
they cannot completely be relied on to indicate the absence of pathogens. This is especially true
where a pathogen is environmentally more robust, or can survive treatment better than the
indicators. In these circumstances the indicator may be absent even though low numbers of
pathogens still remain.

E. coli as a measure of microbiological safety

Despite the possible shortcomings in the use of faecal indicators as a measure of the
microbiological safety of a water supply, monitoring for coliforms and E. coli is still recommended
and standards of quality are expressed in terms of these organisms. The reason for this is that
monitoring for the pathogens themselves remains rather uncertain because methods of analysis are
relatively insensitive and costly compared to those for faecal indicators. Additionally, the absence
of one pathogen will not guarantee the absence of others. Therefore E. coli and coliforms remain
the best and most sensitive general measure of water quality.

An example of a pathogen with which such a discrepancy can occur is the protozoan parasite
Cryptosporidium. This micro-organism is very much more tolerant of the action of disinfectants
than faecal indicators such as E. coli because it forms resistant spore-like bodies called oocysts.
If disinfection is the sole treatment process used, the numbers of Cryptosporidium oocysts will
remain unchanged whereas the numbers of E. coli may be reduced to undetectable levels. UV Disinfection with a pre-filter will remove oocysts from water.</p)

UV Disinfection is the treatment method of choice for most owners of a private water supply. This highly effective method of treatment does not alter the taste of the water, nor does it use chemicals

A 5 micron UV pre-filter will remove much of the particulate material present in water, which, if not removed, could otherwise reduce the effectiveness of UV disinfection by creating an oxidant demand and/or shielding microbes from the effects of the disinfectant. This is a good example of why a multiple rather than a single barrier approach is preferred. In addition, the use of multiple barriers will allow some protection to remain even if one process fails.

UV Disinfection made by Daro

How much does a borehole cost in the UK?

In this short video we look at a the borehole water drilling process in a millstone grit area in the North of England. We also highlight the cost of having a borehole drilled 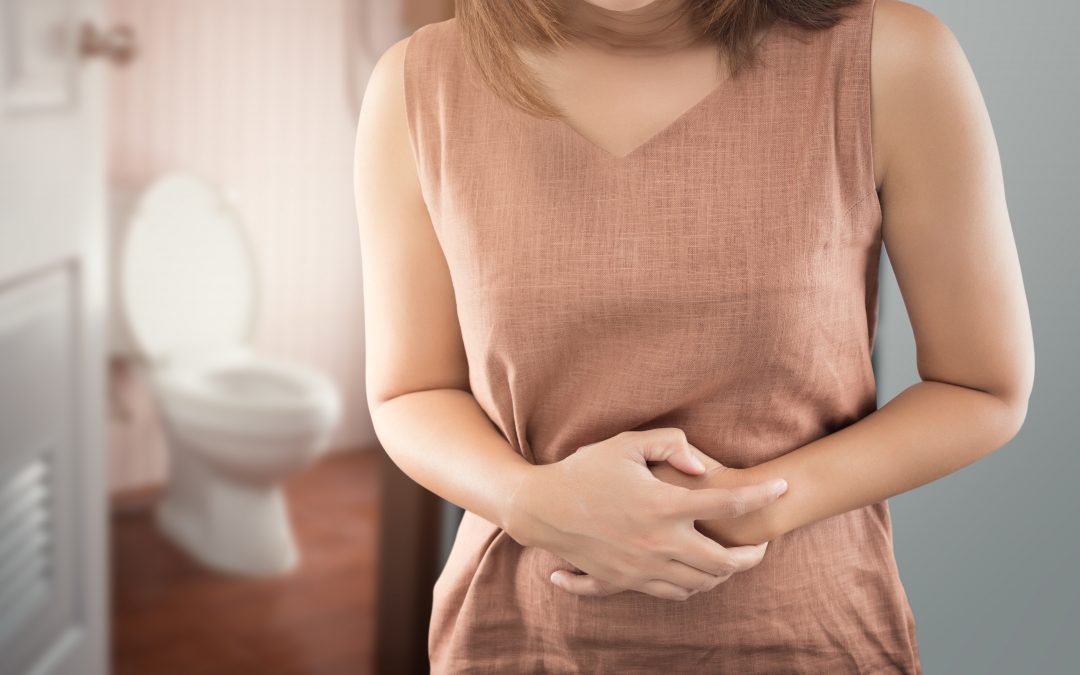 How can a private water supply affect health? Literature review 2008

The quality of drinking water supplied to those people on the mains in the United Kingdom is regularly analysed to make sure that it meets the standards set by the European Commission. The responsibility for independently monitoring the water companies rests with the Drinking Water Inspectorate (DWI) and they advise the government of their performance. According to the report submitted by the Chief Inspector of the Drinking Water Inspectorate (DWI, 2005), English water companies carried out just over 1.8 million tests and the mean compliance rate was 99.94%. On a local level, Yorkshire Water carried out 447,822 tests with a compliance rate of 99.97%. The DWI (2005) report these statistics as showing that the water provided by this company is generally of a very high quality and the health risks relating to drinking mains water remains low. However,  Medema et al. (2003) believes the microbiological quality of water should remain a cause of concern for all water suppliers, regulators and public health authorities as the potential for drinking water to transport microbial pathogens to great numbers of people causing subsequent illness, is well documented in all countries at all levels of economic development.

Private water supplies are not regulated by the Drinking Water Inspectorate, but are the responsibility of local authority environmental health departments who must register the supplies and approve them based on a regime of chemical and microbiological analysis of water samples (Smith et al., 2006).

The most common symptoms

The Said et al. (2003) report highlights 25 outbreaks with private water supplies and subsequent investigations identified 1584 cases and at least 5190 people at risk. The most common symptoms were gastrointestinal and there were no recorded secondary cases of death, although there were several hospital admissions. Clapham (2004) believes these figures underestimate the true number of outbreaks for private water supplies because of general under-reporting of gastrointestinal illness. Supporting evidence for this view is contained in a paper by Wheeler et al. (1999) which concluded that for every case of infectious intestinal disease identified by the national surveillance system, another 1.4 were identified by laboratories. This study concluded that infectious intestinal disease is common, with 9.4 million estimated cases each year in England. However, only 1.5 million were presented to a general practitioner and only a fraction of cases involving Campylobacter being reported to national surveillance. 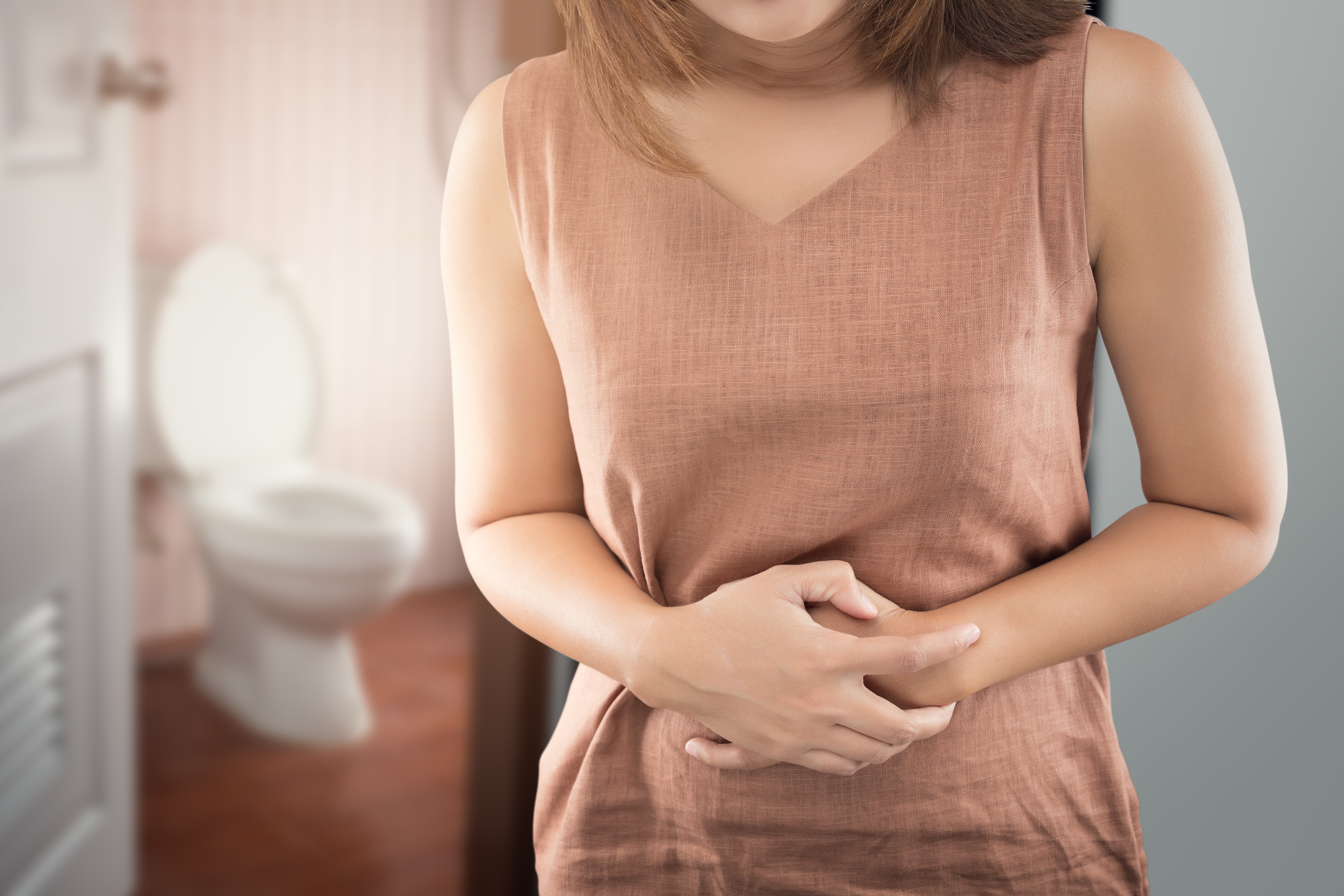