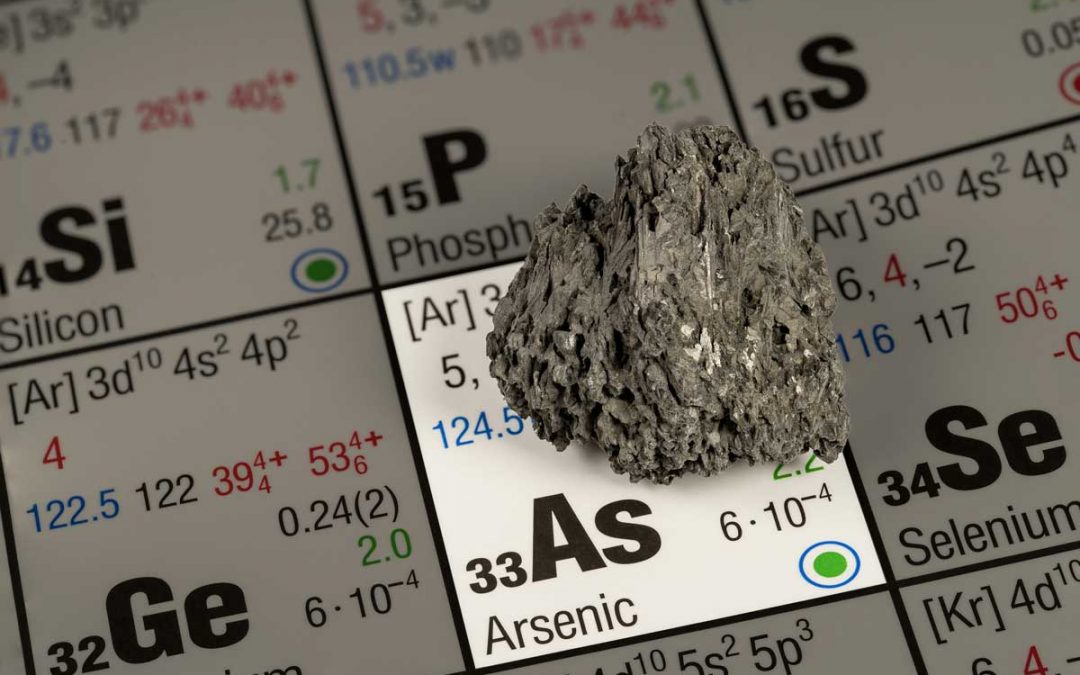 Arsenic is a metalloid element that is found from time to time in water sources in the UK. Its toxic properties are well known, although it has many industrial uses, including wood preservatives, glass and semiconductor manufacturing. Arsenic in drinking water is a major problem in some parts of Asia such as Bangladesh, where it is having devastating health effects on communities.

Arsenic in its common form

Arsenic is commonly found as sulphide minerals, and may also be associated with iron and manganese deposits. 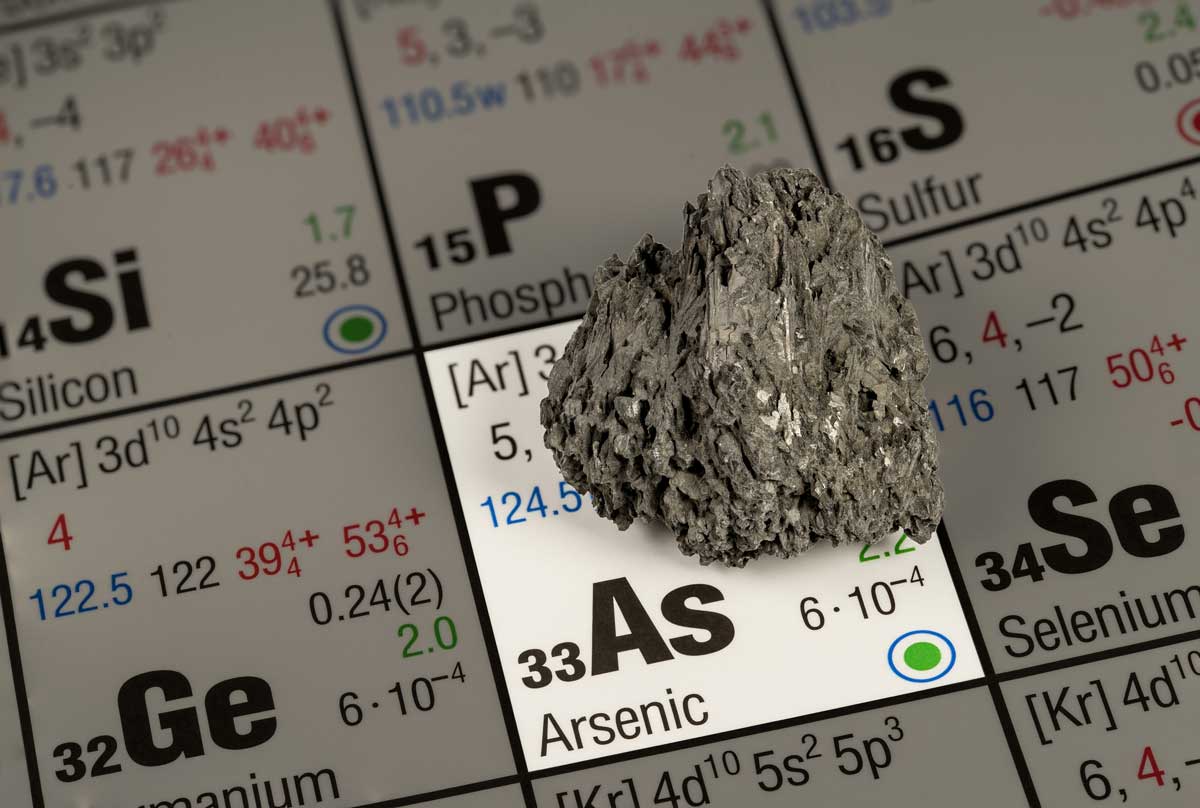 Arsenic is both acutely and chronically toxic to humans. The extent of toxicity is dependent on the chemical form of the arsenic. Prolonged exposure to arsenic can cause skin lesions, skin, bladder and lung cancers. The WHO has set 10 g/l as the health based guideline value. It acknowledges that treatment of arsenic to below this value can be difficult, but points out that increased health risks have been identified from drinking water at concentrations below 50g/l. It highlights an urgent need for further epidemiological studies to improve understanding of the risks.

The Private Water Supply regulations require regular monitoring for arsenic where it is present at more than 75% of the PCV. Arsenic is primarily a risk where it is naturally occurring in local mineral deposits. These can be quite localised, and studies by the British Geological Survey (BGS) into metal concentrations in stream sediments may be helpful in determining the risk from arsenic in a particular area.

Surveys in England and Wales

Surveys of 1200 groundwater sources in England and Wales Shand et al. (2007) , have shown 6% to have concentrations in excess of the 10g/l WHO guideline value and PCV. In the same study, 1% of sources had arsenic in excess of 50g/l, although the majority (68%) contained arsenic at concentrations below 1ug/l.

In groundwaters, the concentration of arsenic can vary greatly with depth. There has been shown to be an association between higher pH groundwaters and higher arsenic concentrations. Man-made sources of arsenic include pesticides and timber preservatives. Water sources where these are or could have been used should be considered at potential risk of arsenic contamination and sampled accordingly.

What should I do if a sample fails?

If a water sample fails for arsenic it would be prudent to gather additional samples to verify the failure and determine the variability of the concentration of arsenic in water. If there are multiple sources, it would be worth sampling each one to determine whether one source has greater levels of contamination than the others.

Is it likely that arsenic is naturally occurring, based on other sample data from supplies in the area and BGS data?
Is there any history of industrial processes that could have used arsenic (paints, pesticides, timber preservation), or large accumulations of products that could have been treated with these products? If multiple sources, are concentrations of arsenic consistent across these?
If the source is a groundwater, how much is known about the construction of the borehole or spring? Is it known at what depth water is being drawn off?

Any failure of the arsenic PCV will also exceed the WHO health-based guideline value. Health advice should be sought.

Arsenic with an industrial origin

Options for resolving at source Where there is an obvious point source of industrial origin, it may be possible to reduce the concentration of arsenic in the water by identifying and removing the contamination. If contamination is only present in one of a number of sources on the same supply, it may be possible to discontinue use of that source and rely on the others, if they provide sufficient quantity.

With naturally occurring arsenic it may similarly be possible to favour sources which have lower concentrations. Where the source is a borehole, arsenic-rich water may only be entering at certain levels or horizons. It may be possible to extend the borehole casing to screen these off, in order to only abstract water with reduced arsenic concentrations. In certain circumstances, the development of a new source of water, either to blend with the existing source or as an alternative supply, may be cost effective when compared against the initial and ongoing maintenance costs of treatment.

There are a number of options for arsenic removal, both at source and at point of use. The chemistry of arsenic is complex, and most removal process work optimally with arsenic in oxidation state 5 [As(V)]. As arsenic could exist in trivalent form [As(III)], especially in groundwaters, it may be necessary to introduce an oxidation stage prior to any removal process. This need not be complicated, but it is likely to involve addition of an oxidising chemical such as chlorine or potassium permanganate as simple aeration is unlikely to be sufficient. Professional technical advice should be sought concerning the oxidation state of arsenic in a particular supply and the requirement and most appropriate method of pre-oxidation. The US EPA have produced a comprehensive document on arsenic removal technologies.

Listed below are the most viable treatment solutions for arsenic removal on small supplies:

Activated Alumina is an adsorptive filtration process. The media consists of small granules of aluminium oxide which have been specially treated at high temperature. Arsenic ions adsorb onto the surface of the grains and are removed from the water stream. When the alumina media is exhausted it is usually discarded and replaced with fresh alumina, although regeneration on or off-site is possible. In order to remove arsenic effectively, it needs to be in pentavalent form [As(V)] and may therefore require pre-oxidation from As(III), especially if the source is a groundwater. The process is also very pH sensitive and operates best at a pH between 5.5 and 6.0, although in practice anything at pH less than 7 should prove satisfactory.

This pH range clearly suits upland waters with high humic acid content, provided dissolved organic carbon (DOC) concentrations are not too high. This process is not especially selective of the arsenic ion, therefore if the water has significant concentrations of other minerals, these can competitively adsorb onto the media and reduce the efficiency of the process. Fluoride in excess of 2mg/l (which is unlikely in the UK) and dissolved organic carbon (DOC) in excess of 4mg/l can have this effect and may require pre-treatment. High concentrations of iron and manganese can also have a detrimental effect on the process by fouling the media. It is feasible to operate activated alumina as a point of use system, but the need for pre-oxidation should be remembered. If this occurs too far upstream, it is possible for reduction of arsenic to take place in the plumbing system prior to the POU treatment, impeding the effectiveness of arsenic removal.

Arsenic has a strong chemical affinity to iron, and a number of iron based adsorbents have been developed to exploit this. There are a range of media on the market, including Bayoxide ® which is an iron oxide based product which has been used to remove arsenic on a number of public water supplies in the English midlands. The principle of the process is similar to activated alumina, although iron adsorbents may operate effectively at slightly higher pH values. Pre-oxidation of As(III) to As (V) will still be required where the arsenic is predominately present in the reduced form. Competing ions that may also be removed at the expense of arsenic removal are antimony, phosphate and silica. Also, where pre-oxidation is required this may also oxidise iron and manganese to insoluble forms which may foul the filter media. Some iron adsorbent filters are designed with backwashing facilities, with backwash frequencies of the order of a few months depending on loadings. As with alumina, exhausted media tends to be discarded. The used media does not usually require special disposal arrangements. Point of use arsenic removal systems are available. Some of these include prefiltration and oxidation stages.

Membrane treatment involves forcing water at high pressures through fine porous sheets (the membrane). Membranes come in differing pore sizes, with increasing pressures (and therefore pumping costs) required as pore sizes decrease. For arsenic removal, microfiltration may be feasible if iron coagulation is used upstream, however the complexity and cost of this probably makes it unsuitable for most private water supplies. Reverse Osmosis (RO) membranes are the most viable membrane technology for arsenic removal as pore sizes are sufficiently small that arsenic ions are retained.

RO systems have the added benefit of removing a number of other contaminants, but operating costs can be quite high and a percentage of water is lost in the waste stream. Disposal of the concentrate (waste stream) may be problematic as chemicals removed from the water are concentrated here. RO membranes are well established as point of use treatment on private water supplies. Some pre-treatment (coarse filtration) may be required to remove suspended solids prior to the membrane. Even then, membrane fouling can be a problem, especially where the water contains a large amount of natural organic matter or salts such as calcium, magnesium, sulphate or chloride. Cleaning an RO membrane is possible, but costly and requires chemicals and expertise that may be beyond the scope of most private water supply users.

The following processes may also be suitable for arsenic removal in small water supplies, depending upon individual circumstances:

Oxidation and Filtration (with iron and manganese removal)